NEW HAVEN, USA – It was another confident start by Johanna Konta as she advanced at the Connecticut Open to face Carla Suarez Navarro in the second round.

Heading into the US Open, British No. 1 Johanna Konta is still very much focussed on getting match play in singles and in doubles as she looks to be regaining her confidence. 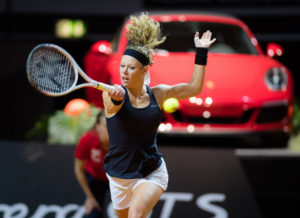 That was certainly evident in her first set against the returning Laura Siegemund, whose recovery from a knee injury kept her off the courts from May last year to March 2018. Having played entirely on clay since her return the rust in her hard-court game was evident as Konta powered through the first set with two early breaks helping her on her way.

Konta broke immediately at the start of the second set but Siegemund was beginning to get a little rhythm, breaking back to level the score once more in the middle of the set before Konta broke her once more before serving out for a spot in the second round.

There is no rest to be had as Konta plays again, this time against Spain’s Carla Suarez Navarro who has started the US hard-court swing quite well coming through qualification and picking up a couple of wins and helped deliver an impressive opener in Cincinnati, although she fell short there.

What Suarez Navarro brings to the court is a versatility not to mention that single-handed backhand that can open up the court for her like a tin of sardines! Yet what impressed about Konta was that thanks to her doubles her variety of shots at the net is improving – she has always been adept at a swing volley but at times lacked finesse but that is coming, and she is likely to get a lot more exercise as Suarez Navarro will look to move her around the court.

What the Spaniard lacks in the power that Konta will call upon with her aggressive game, is an ability to get about the court with speed and precision.