By Ros Satar, in Cincinnati

CINCINNATI, USA – British men’s No. 1 Kyle Edmund is the sole flag-bearer into the second round at the Western & Southern Open, as he renews his rivalry with Denis Shapovalov.

With the main draw starting on Sunday, it was down to British men’s No. 1 Kyle Edmund to get the ball rolling as he took on American wild-card Mackenzie McDonald in night action in Cincinnati. McDonald had been Andy Murray’s first opponent in Washington, and took a set off the three-time Slam champion and former World No. 1, as Murray embarked on a gruelling round of three three-setters on his hard-court comeback.

His aggressive style of play was no match for Edmund who did well at taking time away from the American, breaking once in the first set before sealing it with a service hold to love. It was a far more domineering performance in the second set as McDonald was broken three times in succession, quelling the late-evening crowd.

There was a brief flurry of resistance as McDonald struck back to retrieve one of the breaks and he saved three match points before finally Edmund secured his spot in the second round.

After the match, he said: “I remember watching him against Andy and he was pretty aggressive then, but I think today I played very well and I was aggressive myself. So I don’t think I gave him a lot of time to be aggressive. I felt like I dictated play a bit more today.

“I did a lot of things very well, with the things within my control, so today was just a really nice win and did a lot of good things on court. Definitely gives me confidence going forward.”

The start of the US hard court swing for Edmund was maybe marred a little by a bout of tonsillitis that caused him to pull out of Umag straight after Wimbledon. He lost his opener against Murray in Washington in three sets but by the time he got to Toronto, it looked as though he had nothing left in the tank in a one-sided encounter wit Diego Schwartzman.

He continued: It’s tough to say really [if the illness had an impact]. You just do the best you can with what you have in certain matches. Some matches you don’t play as well, some matches you do but whenever you don’t you always try and get better. What you didn’t do so well you work on it.” 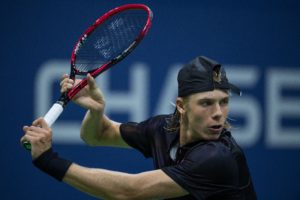 Having met on all surfaces now, Denis Shapovalov has the lead over the Brit in terms of their head to head with perhaps a surprising win over him at the Madrid Masters on a surface that Edmund favours.

Their matches have always been competitive and close and it was a shame that a neck injury caused Edmund to pull out of their third round encounter last year at the US Open, as this is developing into a nice little rivalry between graduates of the Next Gen.

Edmund said: An aggressive player again, so we’ll see what happens, going to have to play well to beat him. I’ll just try and see what I did really well today and try and build on it. If I do more of the same that I did today, I think that will definitely help me.”

Edmund and Shapovalov are scheduled on Grandstand Court, not before 8:30pm (1:30am Wednesday, BST).