KOBE, JAPAN – All the match ratings and talking points from England and Ireland’s second games at the World Cup against USA and Japan respectively. 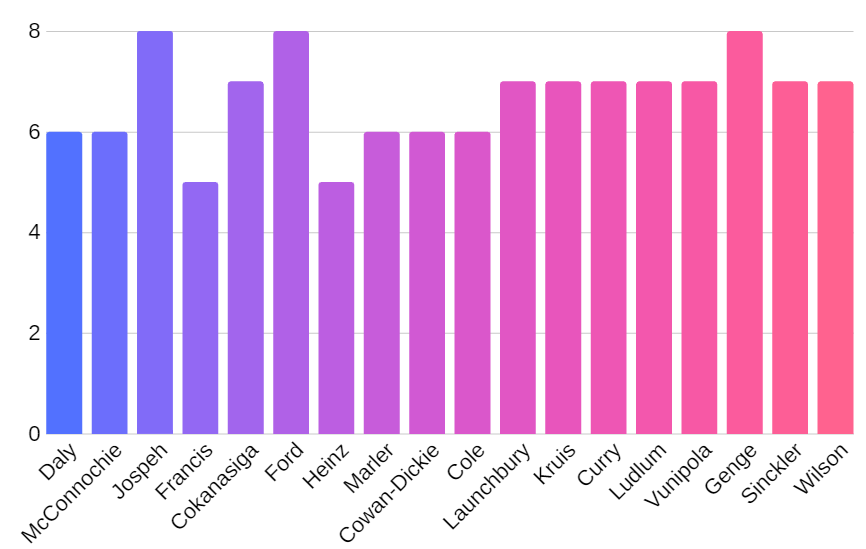 Elliot Daly, 6/10: Will be given sterner defensive tests but hardly his fault, he can only play what’s in front of him. Finds it trickier to get involved in attack from full-back as opposed to wing or his natural position of outside centre, which is a shame for such a smooth operator.

Ruaridh McConnochie, 6/10: He came out on top against his Sevens counterpart and opposite man Martin Iosefo. Took his try well but could have had another if he backed himself – a good all-rounder but it’s a very competitive position for him to break into.

Jonathan Joseph, 8/10: He was standout and provided many of the moments of class in the game. A canny defender in the wide channels and a subtly tough attacker to face. To come from out of the squad earlier this year to a potential starter even when Henry Slade comes back from injury is a great turnaround.

Piers Francis, 5/10: The centre tried manfully but could and perhaps should have been sent off for his reckless high tackle on Will Hooley early on. He was cited but the panel decided it only warranted a yellow card and thus he will receive no further punishment, but is unlikely to play any further part anyway.

Joe Cokanasiga, 7/10: A few loose moments, especially with his handling, which is excusable given the weather conditions and humidity. A bullocking runner, big in attack but suspect under the high ball.

George Ford, 8/10: A man-of-the-match performance from the stand-off. The captain on the day really showed what he can do and his opportunistic early try set the tone for the rest of the game. Whether he can do it in a tougher game when the pack are going backwards remains to be seen.

Willi Heinz, 5/10: Overeager to make an impression and it showed. Steady but unspectacular, not a ready-made game-changer by any means and probably not the man to come on to take the World Cup final by the scruff of the neck if England get there. If only England had someone of the class of Danny Care, Ben Spencer or Dan Robson to call up…

Joe Marler, 6/10: Did the old-fashioned basics well but was subdued in open play, at least compared to Mako Vunipola and Ellis Genge.

Luke Cowan-Dickie, 6/10: A very decent understudy to Jamie George. He took his try nicely and threw solidly in a successful lineout, a little quiet elsewhere but you can’t have everything.

Dan Cole, 6/10: The cornerstone of England’s scrum, which went forwards all day. Like Joseph, he’s done well to play himself back into contention after being dropped initially. Almost anonymous in the loose but ball-carrying isn’t primarily his job.

Joe Launchbury, 7/10: A classic Launchbury performance, he does everything and is everywhere. A couple of handling errors but that’s a by-product of offering yourself so readily.

George Kruis, 7/10: He makes such a difference to the lineout when he’s calling it, and can take credit for the success of the rolling mauls too. Productive rather than polished in the loose.

Tom Curry, 7/10: Can do the pretty linking stuff as well as the dirty work at the bottom of rucks and in the midst of the mauls. An established starter, not bad for someone aged 21.

Lewis Ludlam, 7/10: He imposed himself more and more as the match went on, proving people wrong about his (slightly questionable) selection for the World Cup squad. Took his try well with a good support line and adds X-factor.

Billy Vunipola, 7/10: Possibly the best ball-carrier and hardest to tackle in the world. Isolated moments of sloppiness, but he will be an integral player if England are to do well at this tournament.

Kyle Sinckler, 7/10: A barnstorming carrier when he gets going. Sensibly, uncharacteristically disciplined in this match.

Mark Wilson, 7/10: A rugby player’s rugby player and real grafter. He or Sam Underhill could easily start alongside Tom Curry with no questions asked.

All other substitutes came on too late to affect the game.

All in all, this was a good day for those players looking to put a marker down and claim one of the positions not already nailed down. Ludlam – who could have been left out for Alex Dombrandt or Zach Mercer – has shown something different, McConnochie has shown a remarkable learning curve and Cokanasiga is something else in attack.

Meanwhile Watson, Wilson, Cole, Marler and Joseph have given further evidence they are more than capable of stepping in, showing a strength in depth any potential tournament winners will need.

High tackles under the spotlight

Farrell escaping USA flanker John Quill’s reckless tackle could be the biggest success of the entire match, while Francis was arguably lucky to escape a citing for his high tackle on Hooley with no punishment.

England defence coach John Mitchell has reportedly been working on lowering the tackle height techniques in training – will we see more bans like those handed out to Samoan pair Motu Matu’u and Rey Lee-Lo?

The result creates new questions about England rather than solving existing ones. Can England keep up their discipline? How will Ford react when his pack is not the dominant one? Is Daly wasted at 15? What’s the best lock partnership? Who partners Curry at flanker? Who plays on the wing?

Hosts Japan pulled off one of the biggest shocks in Rugby World Cup history by beating world no.2 side Ireland 19-12 on Saturday. Not since Japan’s scarcely creditable win over South Africa four years ago has rugby witnessed a result that will send shockwaves around the world like this one will.

This was not a result solely down to Irish indiscipline or stage fright, but a truly wondrous Japanese performance before a cacophonous home crowd which lifted their side every metre gained, tackle made and turnover won.

The result will leave a historical legacy for generations to come, and will send rugby into a new stratosphere of popularity in the country.

From the start, it became clear that Japan had no interest in dropping their fast-paced, free-moving gameplan against one of the rugby’s most-respected defences.

Only a bad bounce denied Kotaro Matsushima an opening try after four minutes as the hosts stretched Ireland’s defence left to right before Yu Tamura‘s kick behind nearly paid off.

It looked as though Ireland had weathered an early storm, as Garry Ringrose and Rob Kearney tries eight minutes apart looked to have bought the favourites breathing space. However the fans and the team were unrelenting and Japan did not turn to a Plan B.

The introduction of Michael Leitch, Japan’s legendary captain whose relegation to the bench was the cause of some controversy in the build-up, sent excitement levels in the stadium to a new level after 31 minutes.

The familiar signs that tend to crop up when Ireland are not functioning began to re-appear – missed line-outs, dropped catches and a knock-on after winning a scrum inside their own 22 as the pressure continued to build and from the scrum, Japan went left and Kenki Fukuoka was sent over in the corner.

After the fantastic Scotland result the feeling – after a year of struggling to hit the heights of 2018 – was that Joe Schmidt‘s side were peaking at the right time.

Even an injury to long-time talisman Johnny Sexton did little to halt the feel-good feeling as his replacement Jack Carty, on only his second international start, began well and showed little fear with his nerveless kicks from hand leading to the two Irish tries and captain Rory Best made all six of his line-out throws in the first 20 minutes – but things quickly went downhill from there.

Their five-day turnaround before Thursday’s match against Russia now becomes a much more daunting task and the fitness of Sexton, whose composure and defensive solidity was badly missed in the second half, will be placed under the microscope far more than it would have been had they got the job done.

Next up England face Argentina on Saturday October 5, while Ireland play Russia on Thursday October 3.

-Get the absolute best in sports nutrition supplements-