TOKYO, JAPAN – British No. 1 Johanna Konta gets her Tokyo campaign underway and faces a feisty competitor in Barbora Strycova.

It has been a bit of a wait for Johanna Konta to get her campaign underway as she kicks off what is looking like a hectic autumn swing for the Brit. Starting her time in the Asian swing for the first time at the Tokyo Premier, she has had a fair bit of time to ruminate after a shock first round defeat at this year’s US Open.

The last two years in New York she had reached the first round, but was keen to point out that we shouldn’t hit the panic button just yet. But with runner-up points to defend in Beijing and a run to the Wuhan quarter-finals, this is a great opportunity to get some points in the bank. 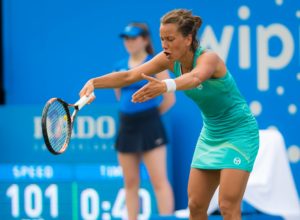 Awaiting her over the other side of the net is Barbora Strycova who came through a couple of tight tie-break sets with many of her trademark exclamations and rants. If indeed there could be a polar opposite of Konta in terms of on-court demeanour, we are hard pushed to think of anyone else in the frame.

Both play aggressively and Strycova is solid off her serve and groundstrokes. Konta can pull out staggeringly good second serves to get her out of trouble, and while she can think her way out of trouble, when the wheels come off for the Brit, games can run away from her.

In general, though she keeps a much tighter rein on her emotions than Strycova, and if there is anything Konta’s adherence to the process is good for, it is removing herself from what is going on over the other side of the net. We can expect there to be some exasperation creeping into Strycova’s game, and when she lets things get to her she can self-destruct most spectacularly.

This is perfectly winnable on paper for Konta, but it is her first match in a while, so we expect her to be a little rusty to get going, and this could easily stretch to three sets.

Konta & Strycova are scheduled on Centre Court, not before 3pm (7am BST).