By Ros Satar, in Stuttgart

STUTTGART, GERMANY – Two time champion Angelique Kerber roared into the Porsche Tennis Grand Prix, while World No. 1 Simona Halep had to hustle into the quarter-finals.

Two-time champion Angelique Kerber brought the curtain down on the first round in fine style, avenging her defeat at the weekend in the Fed Cup semi-final at the hands of Petra Kvitova. Where she had seemed listless and nervous in front of her home crowd, that same energy spurred her on to take control of the match with two breaks in succession at the end of the first set.

As each game progressed her movement and plan of attack looked sharper, while Kvitova seemed to lack that same focus she had shown at the weekend. Kerber picked up the advantage early in the second set for a 4-1 advantage, and never looked in danger of relinquishing that position, although Kvitova did make her earn her advance into the second on her third match point.

“I knew what to expect. I mean we played three days ago and I know how she played on Sunday. She was playing a good match. So, I was going out there, I had nothing to lose and I was just trying to play better than on Sunday, doing a few things a little bit different and also being more aggressive than I was on Sunday and taking the match in my hands. So, I think that was for me the most important thing today.” 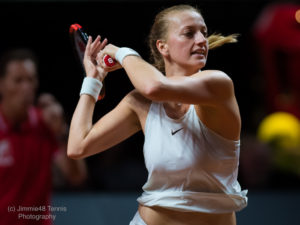 Kvitova may well have felt a little flat having guided the Czech Republic to a for the sixth time in eight years, even though both she and Kerber are no strangers to the tour after Fed Cup weekends.

She explained: We both played Fed Cup (laughs), she didn’t really seem to me flat at all. On the other hand, I didn’t feel the best today to be honest. You know it’s about the nerves and anything but I think that Angie is playing well here in Stuttgart.

“I mean she won here, she’s playing great. There is the Fed Cup weekend but I played on Wednesday anyway, I didn’t really think it was too bad. It wasn’t really a long match on Sunday. But, of course, emotionally it’s pretty tiring. That’s true.”

In the past Kerber was maybe not making as much use of the advantage of having a leftie-serve as she could have done, but her adjustments since the start of the year had been remarkable.

Kvitova continued: “I think she’s using her lefty serve actually from both sides. I think she did it more on Sunday than today. She mixed it up more today, playing more to my backhand as the serve.

“But I think that she is using her side spin from the serve to my forehand when she can open the court on the left side. She doesn’t really have like a very fast serve but she can like put it into good placement.”

It was less clean cut for Simona Halep as she had to come from a set down against Magdalena Rybarikova, after struggling with an injury early in their match. Kicking off the second round, Halep had to strike back after losing her serve at the start of the match, before handing Rybarikova a break for the first set.

It looked as though this was not going to be her night, after the Slovakian broke once more at the start of the second set, but Halep rallied to break her three times in a row to level things up. Losing her serve after a long game at the start of the decider could have spelt danger signs, but the Romanian broke straight back and that seemed to be the turning point for her, as she nudged ahead with a break to love and from there closed the match out on her first match point.

Halep said, after the match: The final set was a good set and I think I played smart, I played what I had to play, actually from the beginning. But I just started to play flat and no angles at the beginning, and that’s why I couldn’t take the first set. Then I changed the tactic and felt really better.

“I felt my muscle, the hamstring. It’s not easy on this court, as I said always. It’s tough, it’s slippery and you never know what is happening on court, so I have just to take care of my body now and to be careful.”