By Ros Satar, in Melbourne

MELBOURNE, AUSTRALIA – Kyle Edmund got his best career win as he overcame a tricky opener against US Open finalist Kevin Anderson to advance to the second round.

Having seen the great run Kevin Anderson had made at the end of the year, having missed the early part of the season due to injury, it was small wonder that British No. 2 Kyle Edmund was given short odds in terms of advancing.

That being said, when they met for the first time at Roland Garros – a surface that suits Edmund well, the Brit took the rangy South African to five sets. It would require as monumental an effort again for the quiet spoken Yorkshireman.

Although Edmund had to fend off a couple of break points in the first set, he remained competitive all along, and frustratingly it was just the smallest lapse in the tie-break that saw Anderson capitalise on breaking the Brit twice. 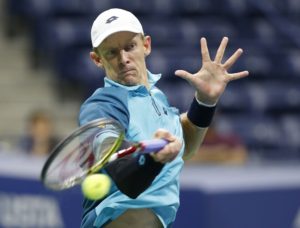 The key to this match was the slimmest of margins – the second set starting as competitively as the first. The only break points of the set were Edmund’s as he knocked on the door, starting to get the better of Anderson in the longer rallies.

A single break was all it took to level up the match, and the levels did not drop for either man. Again, the only game to offer up break points for Anderson to take the lead came in just one game as he edged in front once more.

Only in the fourth set did any real lapse come, as Edmund jumped out to a 4-1 lead amd failing to convert on a set point/breakpoint chance before leveling the match for the second time.

Stamina used to be an issue for Edmund, and indeed he had to get some brief treatment for his shoulder later in the match as the deceider would test their nerves.

First blood went to Anderson, but Edmund showed incredibe resolve to break straight back – in that was the defining point of the match. Last year he perhaps let some close matches slip through his fingers but not this time as he broke him again before nonchalantly serving the match out to love.

Talking after the match, he said: “Against Kevin, you know you’re not going to get many opportunities. You really have to be ready when they do come. It was good the fourth set I broke him, 2-Love, then Love-40 down, 3-Love, big moments in the match. Yeah, it was important.

“He just serves himself out of trouble so much. Very difficult to read it. So when you get a racquet on the ball, it really has to go in the court. I thought I did a pretty good job.

“I think when I needed to, I got the ball in play as much as I could. I took chances basically, and they paid off. Really calculated risks, I’d say. It was good. Especially in the fifth set, going down a break, then breaking him twice in a set to win it is pleasing.”

While Edmund could at least like with like against another powerful hitter in Anderson, he faces another player who can put up quite the fight. What he might lack in unreadable serving power, Denis Istomin can make up for with consistency, and decent technical ability on all fronts.

He can hit the ball very flat, and from all parts of the court, and will not allow himself to be pinned at the baseline.

He has slipped a little down the rankings but obviously at the same stage last year, he showed that he was not afraid of the big stage – if he kept his resolve taking out the World No. 2 Novak Djokovic, then Edmund is more than fair game.

There is a lot to be said for more confidence though – Edmund seems to be a lot happier in his own skin, and he seems to be handling the mantle of heir apparent to Andy Murray well so far this week.

Edmund and Istomin will be scheduled to play on Wednesday.